A prop oft mentioned and seen in ‘Star Trek’ from ‘The Next Generation’ onwards, the dermal regenerator is a wonderful little slice of 24th century medicine.

Usually depicted as a small, handheld device that emits a miniature laser beam, the Regenerator is used to heal minor flesh wounds, fix scars and repair trauma that would otherwise require stitches. 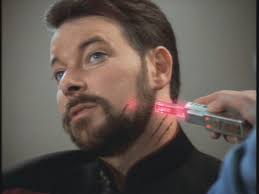 As far as I know, the theoretical underpinnings of this amazing device are never discussed, so I have no idea how it is supposed to work (unlike warp drive, which is powered by a matter/anti matter reaction, just in case you wondered).

Why we want it:

Can you imagine never needing to have stitches or never having to painfully heal up after a nasty run in with a kitchen knife? Moreover, can you imagine a world where serious injuries, 3rd degree burns or facial scars could be treated permanently, in a matter of seconds?

Many painful minor injuries would be rendered completely harmless and hospitals would get through most of their A&E in-patients in a matter of minutes.

When can we expect it?

Dermal regeneration technology is actually not as far away as we might think.

A few years ago, scientists pioneered what they called a ‘skin cell gun’ as a method for treating burn victims. This little doohickey literally sprays stem cells taken from the victim onto the inflamed skin.

While a skin graft can be prone to infection, take ages to heal and involve a long and agonizing recovery process, the skin cell gun can replicate a successful skin graft in a matter of days, completely removing the need for surgery.

The skin cell gun can be used to treat second-degree burns, as it relies on the body’s natural healing abilities and works with existing skin cells. It is, however, not quite at the level of Star Trek’s favourite medical tool.

The gun cannot be used to treat third-degree burns, for example, because they strip away both the epidermis and dermis skin levels, leaving the cells nothing to work with. In addition, the gun can only be used on fresh burns.

There are other drawbacks too, leading to the skin cell gun’s status as ‘not yet approved’ by the FDA. Principally, the device is still relatively untested and no one knows what sort of long-term future the repaired skin may have.

On the upside, Jörg C. Gerlach, inventor of this amazing device, has also been able to demonstrate that the newly grown skin cells actually go on to become fully functional in every way, forming epidermis, dermis and even new blood vessels. The new skin also better matches the original pigmentation of the victim.

It is hoped by many in the scientific community that a similar method as that used by the skin cell gun may also one day be used to grow replacement organs for those in need of a transplant.

Star Trek’s dermal regenerator may yet be a convenient fiction, but the prototype for it exists in the here and now, with extremely promising results. Will a technology that closely resembles the ones used by Beverly Crusher and her colleagues in the 24th Century be available in the real world one day? It certainly looks likely, I’m happy to say.

Nothing says progress like laser beams that re-grow injured skin in a matter of seconds. Imagine the amount of people who’s suffering would simply cease. Here’s hoping that we eventually see this device in action (or not, as the case may be, given that I’d probably have to endure a painful injury in order to do so).