Placing a city (or several) on the moon has long been a dream of science fiction writers, futurists and ambitious scientists. Recently however, renewed public interest in space exploration, together with a growing realization that the world is becoming dangerously overpopulated, has lead some scientists, artists and zealous would-be lunar colonists to start taking this ages-old dream extremely seriously.

Why we want it:

Because it could potentially be one of the only non-genocidal solutions to the eventual overpopulation of planet earth. Also, who wouldn’t want to sit on the moon and watch the Earth rise?

When can we expect it?

A couple of years ago, a group called Moon Capital launched a high profile competition, allowing scientists, architects and aspiring artists the chance to create scientifically plausible scenes of moon colonisation (in the style made famous by super-artist Chesley Bonestell).

The competition had (hypothetical) moon colonisation taking place in the year 2068. This estimate was good enough for the entrants of the competition, so it’ll be good enough for us, too. Hopefully, then, you’ll get your lunar colony in about 55 years time (just under a hundred years after Neil Armstrong took that one small step….)

Of course, the problems posed by such a feat of engineering are many-fold. For starters, the moon is some 380,000 km away from us at any given time, (which is quite a trip for a moving van, even taking speed cameras out of the equation), then there’s the difficulty of actually building a working city in such a hostile environment…

We’ve built space stations, of course, so we know we can construct things in space, but they aren’t exactly desirable places to live. Also, we can get people to the moon and back (we’ve been at it since the 60’s, no matter what the conspiracy nuts tell you), but the trip is still intensely dangerous and requires a great deal of training and preparation. 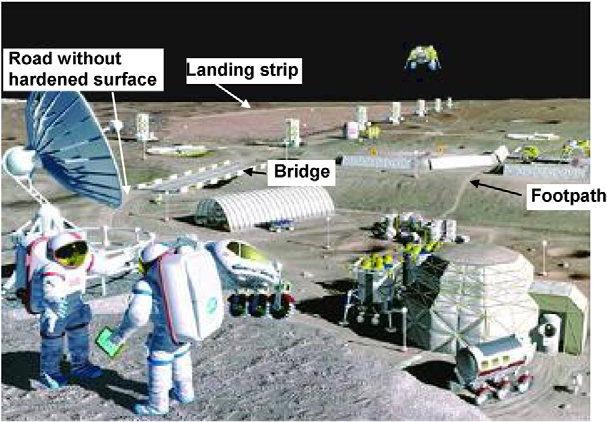 Finally, we come to the complete lack of breathable atmosphere on the moon; this would require scientists to create some sort of artificial environment (or else speed up development of terraforming methods, but that’s a story for another time).

Oh yeah, there’s no food either, not unless you like your Selenite steaks rare.

Yes, the idea of colonising the moon poses a number of mind-boggling obstacles, but if there’s one thing that we as a species excel at, its overcoming obstacles.

So, while it may seem far-fetched to imagine something like this actually happening, consider this; the first powered flight took place in 1903 and just 66 years later, Neil Armstrong and Buzz Aldrin were hanging out on the moon. Think on that for a second.